The Small Assassin peeked over the wall. His target, the Man with the Bicycle, sat at a small table in front of his bungalow, sipping a cold beer, unaware that had been observed for hours. At long last, a golden opportunity was before him.

Although he was only 7 years old, the Small Assassin had been aware for some time that many guests came and went at the farm-stay across the lane from his hideout; couples on honeymoon, the occasional tourist or two, or those who spent all their time inside the bungalow, away from the heat and humidity. But these people were no good at all to the Small Assassin, who was always on the hunt for the right target.

Yet, the Man with the Bicycle was different from all the others. He seemed to enjoy sitting outside, listening to the cicadas that erupted into song several times a day, walking around the farm to visit with the people, or sit at the table researching Vietnam with his hand held device, like he was doing right now. The Small Assassin steeled himself, ready. The Man with the Bicycle was one big sitting duck.

Time to make his move. It was now or never.

As he began his furtive ascent up the outer wall of the Man’s courtyard, a small dirty hand stabbed out of the gloom from behind him, grabbing at his shorts, almost pulling him off the wall. “WAIT!” whined a tiny voice, “where are you going? You know I can’t climb this thing!” It was his constant sidekick, Junior Small Assassin, 3 years old.

“I’m going in. He does not suspect us. You will go around the other way,” he hissed at his barefoot brother. “Small Assassins never use doors. Once you graduate from Junior Assassin Academy, you can follow me over walls all you want. Now go, and remember what we rehearsed!”

The diminutive Junior Assassin nodded solemnly at his brother, and trotted off, barefoot, making a beeline for the front gate of the Homestay. A small fat old dog waddled along behind him, sensing an adventure.

Small Assassin resumed his climb. He reached the summit of the wall.

“Hi Hi!” called out a quiet voice to the Man’s right. The Man looked around, and then up. There, on top of the garden wall, sat a boy, smiling casually.

“Well, hello!” Said the Man, in surprise.The boy nonchalantly hopped down into the courtyard, strode confidently towards the Man, holding out his hand in greeting. They shook. The boy winced at the grip, muttering to himself. The Man smiled, knowingly, and motioned to the patio chair next to him. Turning to his phone while the boy took a seat, he opened Google Translate, and typed “my name is George,” and handed the phone to the boy.

The Small Assassin couldn’t believe his luck. The Man was playing right into his hands. Deftly, he reset the app to Vietnamese to English, hit the microphone button, and spoke “I am the Small Assassin. Do you have YouTube?” The phone translated.

The Man groaned, inwardly. He sensed a con was in the making.

“Um…no,” he lied, shaking his head with apprehension “my, uh, my phone won’t allow me to use YouTube in Vietnam. Ummm…very bad for wallet.”

Then, suddenly and on cue from the left, Junior Small Assassin slid into view, charging up the sidewalk, an old dog, wheezing, tongue lolling, bringing up the rear. “I AM JUNIOR SMALL ASSASSIN!” the little boy announced with ferocity and promptly climbed up into the startled man’s lap, taking a seat. “Give me that phone!” he yelled with gusto.

“He says he has no YouTube,” his older brother informed Junior, passing the Man’s phone to his associate. The Man began to sweat as Junior furiously swiped left, then right on the screen, finally locking in on an app. He pressed it, triumphantly, and waved the phone in the Man’s face. “Oy!”

YouTube promptly leapt to life, lighting up the expectant faces of the two warriors. “Well shit, would you look at that,” the Man mumbled with growing despair. Already, there wasn’t enough beer in the world to shield him from what was up on deck next.

Phase two of the Master Plan snapped into action. “Fee Fying!” yelled Junior Assassin at the Man, pointing at YouTube. The Man scratched his head. “Fee Fying?” Then, with a smile of recognition, the Man typed three words into the search engine and hit return.

The Man snapped his fingers along to Tom Petty and the Heartbreakers, grinning devilishly at the two invaders, and took a long delicious sip from his Hanoi Special.

The old dog got up, deciding this wasn’t going anywhere. He sniffed at the Man, and then waddled back home.

“NOOOOO!” The warriors didn’t have time for this crap, either. They were on a mission, having gotten this far already. Victory was near. It was time for another tactic.

Google translate!” barked the Small Assassin, and with lightening speed, his apprentice flipped over to the voice app.

It was at this moment that the entertainment for the rest of the evening began to unfold before the Man with the Bicycle:

Fee Fiah” the boys yelled into the microphone.

The Phone considered for a moment. Then the screen lit up:

“AUGHHHHHH!” Junior screamed. His brother grabbed the phone and barked at it. 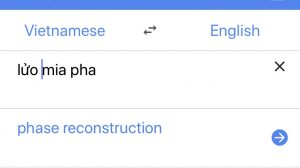 A shouting match erupted between the two warriors, as they fought over who had better pronunciation. The Man sat, sipping with amusement, as their Master plan unraveled. This shit was too much.

The, an idea dawned on him. The Man wrestled the phone away from the boys, typed two words, and hit the translate button: 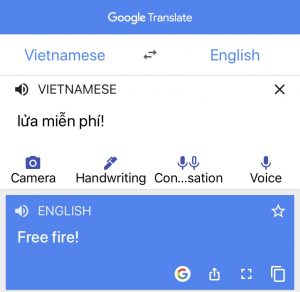 “Oh hell YESSSSS!!!” cheered the boys, triumphantly. The Man sat, pleased with himself, and then got up to get another beer.

When he came back, his seat had been commandeered by Junior Assassin. Both boys huddled before the phone, oblivious to the Man, absorbed with YouTube. A computerized combat game unfolded before them. Two battle-armed warriors, one quite shorter than the other, crept through tall, waving computerized grass, hunting their enemy, leaping up now and then to fire off their bows and arrows. Blips, bleeps, and squawks blared from the commandeered Phone.

Soon, on the screen, a sleek, black race car swept into view on the horizon, zoomed up to the edge of the field, and beeped for the warriors. Two big black doors slid open.

The Small Assassin looked at the Man with the Bicycle. “Maserati,” he explained, and turned back to the game. The computerized assassins jumped into the waiting car, the doors clicked shut, and the race car peeled off, carrying the two boys away from the heat, the humidity, and far away from their hideout

The Man sat on the porch, sipped his beer, watching the Small Assassin and his sidekick disappear into the distant horizon.

I’m George Maurer, and I’m on an adventure called 53 Across Vietnam:  The 6th Annual Carolyn A Held Memorial Bike Ride for the next 20 days, raising funds for cancer research.